As we look back at 2022, it’s clear the TikTok community has been at the centre of the world’s biggest cultural trends and movements. The creativity and engagement on TikTok sparked joy and collaboration globally, and once again music has been right at its heart.

From opening the door to emerging artists to driving countless hit records and chart successes, TikTok continues to empower and support the next generation of superstar artists whilst also breathing life into catalogue classics.

Throughout the year, artists have used TikTok to connect with fans and find new ones - laying the foundations for future careers and sustained success off platform. From Venbee and Nicky Youre signing to Columbia Records after releasing tracks through our music distribution and promotional platform SoundOn, to Sam Ryder's historic moment representing the UK in Eurovision, it's been inspiring to watch our community bring new talent to the forefront.

Today, we're releasing our 2022 Year in Music on TikTok, a celebration of the artists and tracks that dominated TikTok in the UK in 2022. This includes the top songs that soundtracked 2022, the most viewed British artists accounts and our homegrown breakthrough artists.

"The music that thrived on TikTok in the UK this year has been as unpredictable and diverse as ever. Just look at Louis Theroux, Kate Bush and even Encanto's We Don't Talk About Bruno in the top tracks, who all became the centre of massive trends on TikTok. It's also been a standout year for emerging talent. From Nicky Youre and Stepz, to Venbee, Cat Burns, FLO, Dréya Mac and so many more - a new generation of wonderful artists are building brilliant, long-term music careers with a huge amount of support and love from our TikTok community. It was especially amazing to see Sam Ryder, as an artist we've worked closely with for two years and who has appeared regularly on our Year on TikTok lists, become the UK's Eurovision hero enthralling fans around the world at the Eurovision Grand Final - our biggest LIVE moment on TikTok with a UK artist this year, alongside incredible shows from Sam Smith, Lewis Capaldi and more. A huge thanks to all the artists, managers, labels and fans who have been part of our journey in 2022, and to our creator community who never cease to amaze us. Bring on 2023!"

“This year, we’ve seen music from every genre and every market take off globally on TikTok. Swedish rapper Yung Lean has our most popular song of the year - closely followed by the talented Nicky Youre & dazy. Kim Loaiza and Bad Bunny brought Latin music to the world and no one could have predicted the global rap phenomenon that was 'Jiggle Jiggle' by Duke & Jones and Louis Theroux. Our community embraces and engages with music like no other, putting their own spin on sounds and breathing new life into old hits. These dedicated music fans, the artists and music creators and the sheer breadth and diversity of music is what we love about TikTok - I can't wait to see what’s unearthed in 2023”.

The Playlist: Songs that soundtracked 2022 in the UK 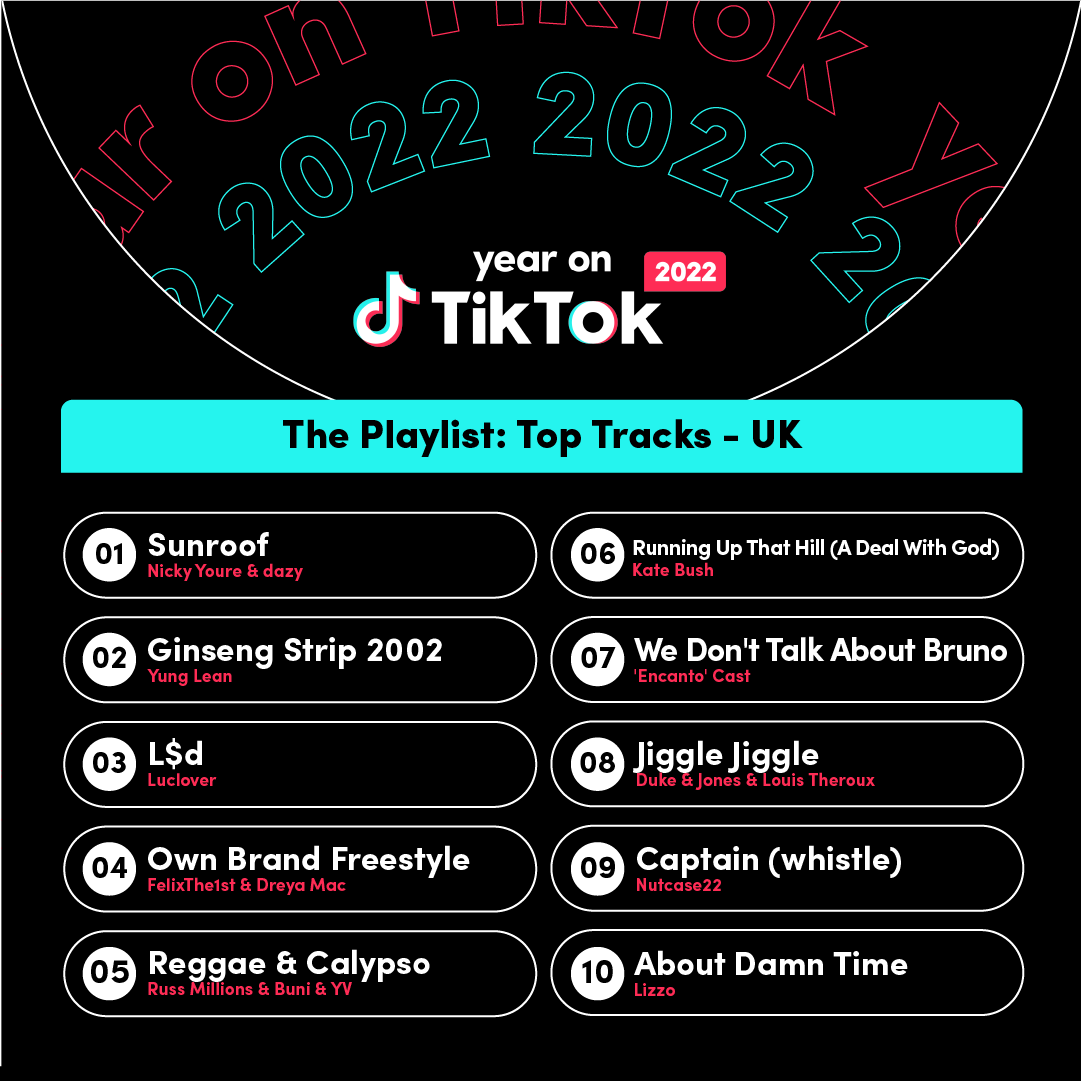 Our most popular song by video creations is 'Sunroof' by singer Nicky Youre and producer Dazy, which charted in the UK Top 40 and propelled Nicky to global prominence.

Young emerging British rappers also heavily feature in our top 10, including Dréya Mac and FelixThe1st, Russ Millions and Nutcase 22 who have all had an astronomical rise on TikTok. Creators have used these tracks in everything from viral dances to football freestyles.

Coming in at sixth place is the catalogue bombshell that was Kate Bush's 80s hit 'Running Up That Hill (A Deal With God)', which was brought back in the spotlight after it featured in a critical scene in Stranger Things. In eighth spot, we have the contagious and catchy rap that got stuck in all our heads: 'Jiggle Jiggle' after Duke & Jones remixed Louis Theroux's Jiggle Jiggle rap from twenty years ago on his Weird Weekend series.

Commenting on his global smash hit Nicky Youre said:

"To be the most listened to sound on TikTok in the US and the UK is something I never even imagined could happen. When I started my career this year, I told my team that I was going to go all in if we were doing this. I’m so glad I trusted my gut and gave my dreams a chance to become a reality. I feel so blessed and inspired by everything that’s happened to me this year and I can’t wait to keep doing what I do. This is just the beginning! Thanks so much to TikTok and all my listeners for supporting me and my music. I would've gone insane without y’all being there for me."

The Hitmakers: Most viewed UK artists in 2022 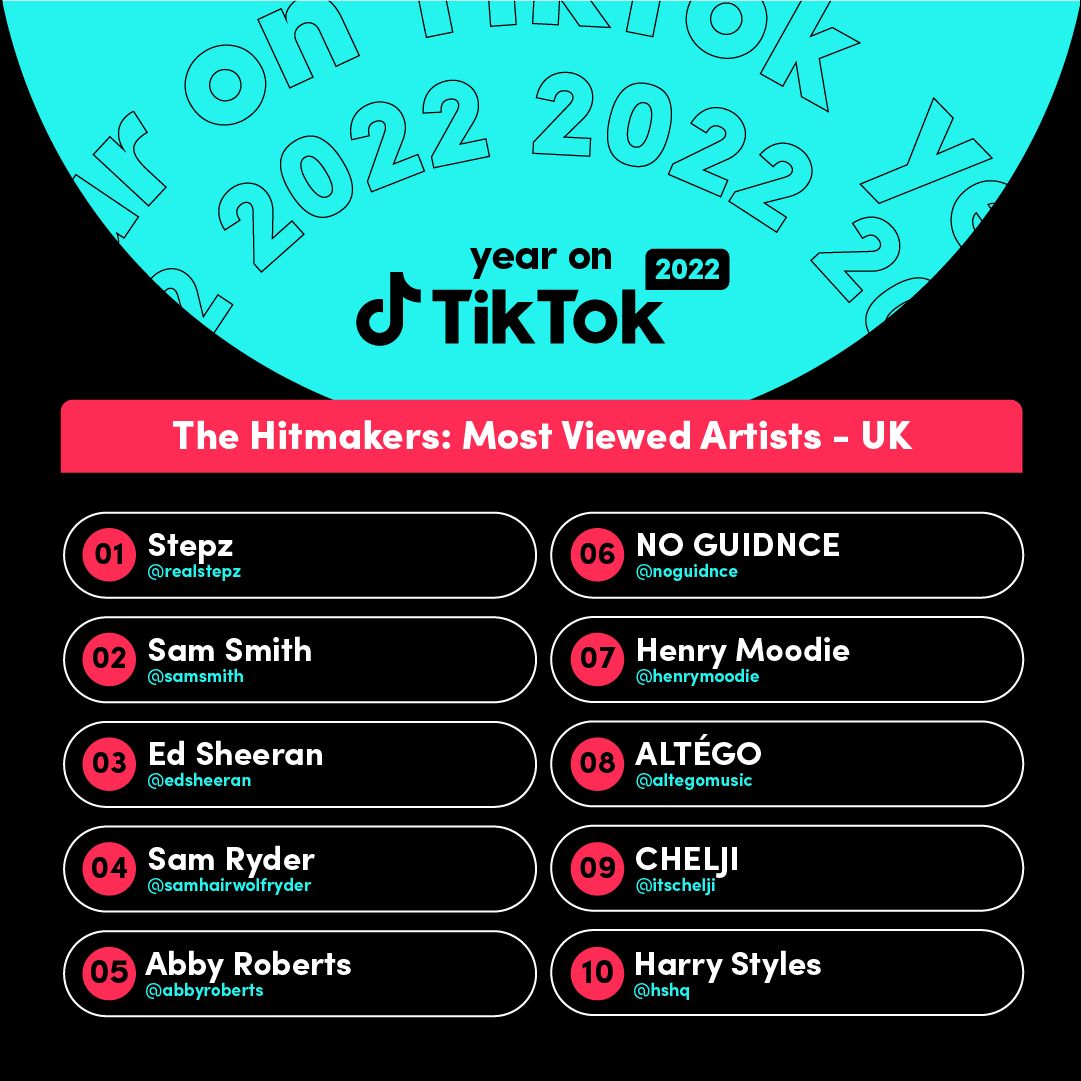 London rapper Stepz takes the top spot for most viewed UK artist account. Stepz had a massive year after his track 'Cramp Dat' blew up on TikTok over the summer.

Sam Smith comes out second after fans lapped up their behind-the-scenes content and duets with fans using 'Unholy'. Meanwhile Ed Sheeran, who was number 1 on the list last year after his record-breaking LIVE, has moved into third place.

Sam Ryder also features in the top 5. Over 3.3 million fans from around the world tuned in for the Eurovision Grand Final, making it the biggest LIVE moment on TikTok with a UK artist this year.

In celebration of smashing it in 2022 on TikTok Stepz said:

"Gaining an audience since I started TikTok allowed me to chase my dreams and allow my sound to be heard with music globally all thanks to God + TikTok my life has changed!"

Our Breakthrough Artists of 2022

In 2022, we strived to make TikTok a platform that supports artists through every stage of their career. SoundOn is one way we do that, as well as our new music discovery format StemDrop, which gives artists and creators the opportunity to collaborate with some of the world's most iconic songwriters.

Our breakthrough artist category celebrates the artists that have truly broken into the mainstream this year and achieved sustained success in the industry, with the help and support of viral TikTok trends and fan connections.

Hear from our breakthrough artists about how TikTok has boosted their careers this year:

Year on TikTok 2022 is based on internal research and trends analysis conducted from January to October 2022.

Join our global community on TikTok by simply downloading the app for free via the Apple App Store, Google Play or Amazon.