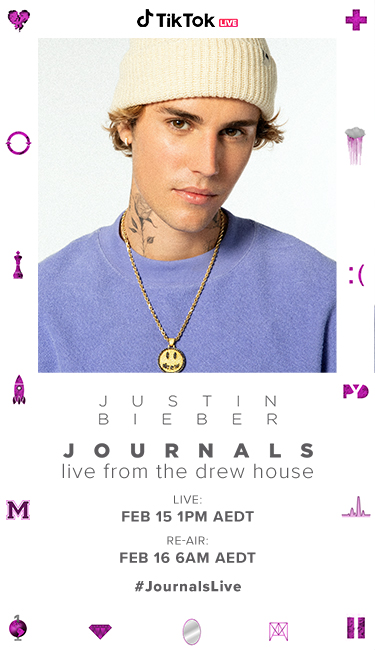 A pop superstar with a catalog full of love songs, Justin Bieber has always been a romantic at heart. Showing love to TikTok, Justin Bieber announces “Journals Live from the drew house,” the first ever single-artist, full-length concert performance to air LIVE on TikTok. Featuring Justin’s first-ever performance of songs from his fan-favorite 2013 album JOURNALS, #JournalsLive airs live from the drew house on Justin’s TikTok account (@justinbieber) at 1pm AEDT on Monday 15 February, re-airing at 6am AEDT on Tuesday 16 February.

#JournalsLive this #ValentinesDay here on my TikTok

With over 19.6 million followers, Justin Bieber is an active member of the TikTok community, using his account to reveal behind-the-scenes footage, partake in the latest trends, and more. His first-ever TikTok, which included a snippet of his hit song “Yummy” (which was a big TikTok hit with over 5 million video creations) generated over 117 million views. Most recently, Justin declared his devotion to his wife Hailey with a stylish video soundtracked by his single “Anyone.” Justin is currently trending worldwide with his Benny Blanco collab “Lonely,” which has over 842k video creations and more than 5 billion video views.\

#JournalsLive airs at 1pm AEDT on Monday 15 February, re-airing at 6am AEDT on Tuesday 16 February.