2021 was a year in which music came back in many ways. Live music began its heady return. We got to dance again at festivals and nightclubs. And we had global superstars like Ed Sheeran and ABBA rejoin the charts with fresh new music.

It was also a year where we saw so many emerging, British music artists go from making music in their bedrooms to performing chart-topping hits to fans across the country.

Throughout the year, TikTok has been part of this evolution in music, every step of the way. From Tion Wayne and Russ Millions, enjoying a historic moment with the first Drill track to reach #1, supported by a viral verse from ArrDee, to Ed Sheeran's record-breaking performance at the UEFA EURO 2020 Show, TikTok has been a partner to the industry, supporting the success of emerging and established artists both on and off platform.

Today, we're releasing our Year on TikTok 2021 Music Report, our analysis of the tracks and artists that dominated TikTok in the UK in 2021. Included in the report are our 10 most popular UK songs used in TikTok video creations; together these racked up over 219 billion video views on 131 million creations. In 2021, over 40 trending TikTok songs entered the Top 40 of the UK Official Singles Chart (compared to 10 in 2020) including four that took the number one spot.

Paul Hourican, Head of Music Operations EU and UK for TikTok: "2021 has been a landmark year for TikTok, our artists and partners across the UK music industry. A year when our artist community and sounds became even bigger and more diverse, and when fans discovered and re-discovered incredible music, both new and old. The ascent of "Body" from Tion Wayne and Russ Millions, the reimagining of sea shanties by Nathan Evans, the long anticipated new music of Ed Sheeran, the rise of #busker, and Pink Pantheress' global success have all made 2021 truly unique. Thank you to all the artists and industry partners who have been part of our journey and the community who have used such great music in their video creations. The creativity and inspiration of our creator community and those that enjoy their content, never ceases to amaze us; we're excited to see what we can do together in 2022."

Building on last week's Year on TikTok 2021, we wanted to celebrate the artists, tracks and genres that were the soundtrack to 2021. This year, we're revealing the UK's top tracks by UK artists, the top comeback tracks, most viewed artist accounts, top genres, biggest LIVE moments and most duetted artists who have made us dance, smile and shared their creativity and musical talent with us throughout 2021.

This year was host to the UK's first number #1 drill track - "Body" by Tion Wayne & Russ Millions - and there's no denying TikTok's impact on its meteoric rise. A big congratulations to the whole team behind the track for another gong, recognised today as our #1 track by a UK artist, based on video creations.

Sam Smith's "Like I Can" and PinkPantheress' breakout hit "Just For Me" follow, while other favourites like Dua Lipa's "Levitating", Nathan Evan's "Wellerman" remix with 220 KID & Billen Ted, and Wes Nelson's "Nice to Meet Ya" make up the rest of the top 10. 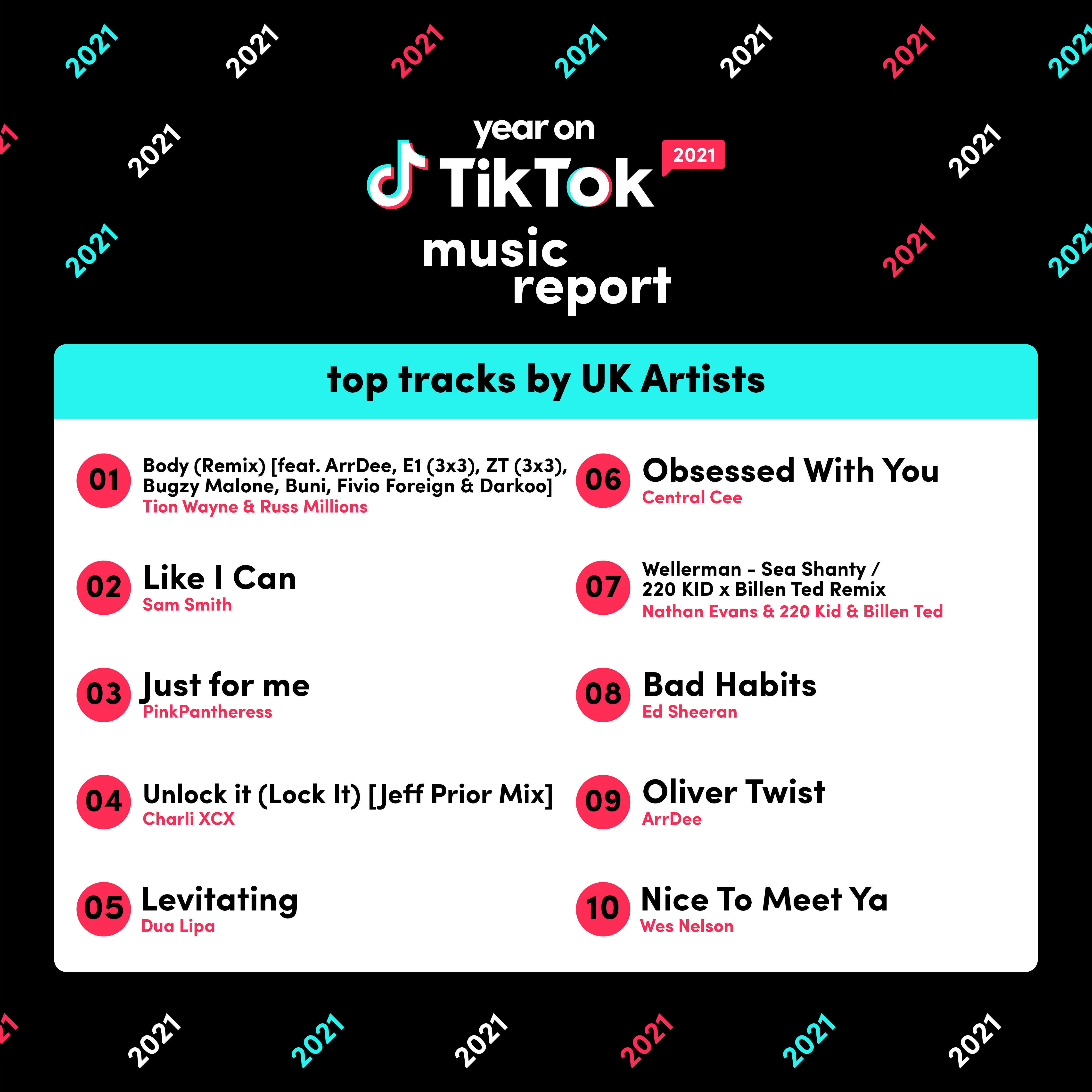 TikTok has a knack for making the old new again, helping a new generation of fans re-discover former chart topping hits. A pop favourite, "Bills, Bills, Bills" by Destiny's Child takes the top spot as most popular comeback track in the UK in 2021, while "Rasputin" by Boney M. taking second place, with the 70s disco track getting a reboot by the meme-generation. In an important year for pop icon, Britney Spears, she features twice in our comeback list, as fans reacquaint themselves with her beloved sounds. Meanwhile, Baddiel, Skinner & Lightning Seeds' "Three Lions '98", makes a return to our hearts and minds, with this anthem underpinning the excitement of the UEFA EURO 2020.

Behind the Music: Most Viewed Artist Accounts

Ed Sheeran has overtaken last year's leading artist, Essex singer-songwriter Sam Ryder, as our most viewed artist account. Ed has had a massive year on TikTok, with 5.5 million people tuning into our platform to watch his live performance at the UEFA EURO 2020 Show. Ed also launched three exclusive single previews on TikTok, as well as a hashtag challenge #EqualsAlbum to celebrate the release of "=".

This year's most viewed artist accounts show the wide spectrum of music and content that appeals to the TikTok community. From YUNGBLUD's passionate speeches on inclusion, to Here At Last's heartwarming and upbeat videos, it's clear that both established and emerging artists of all genres and personalities can build a community of fans on TikTok. 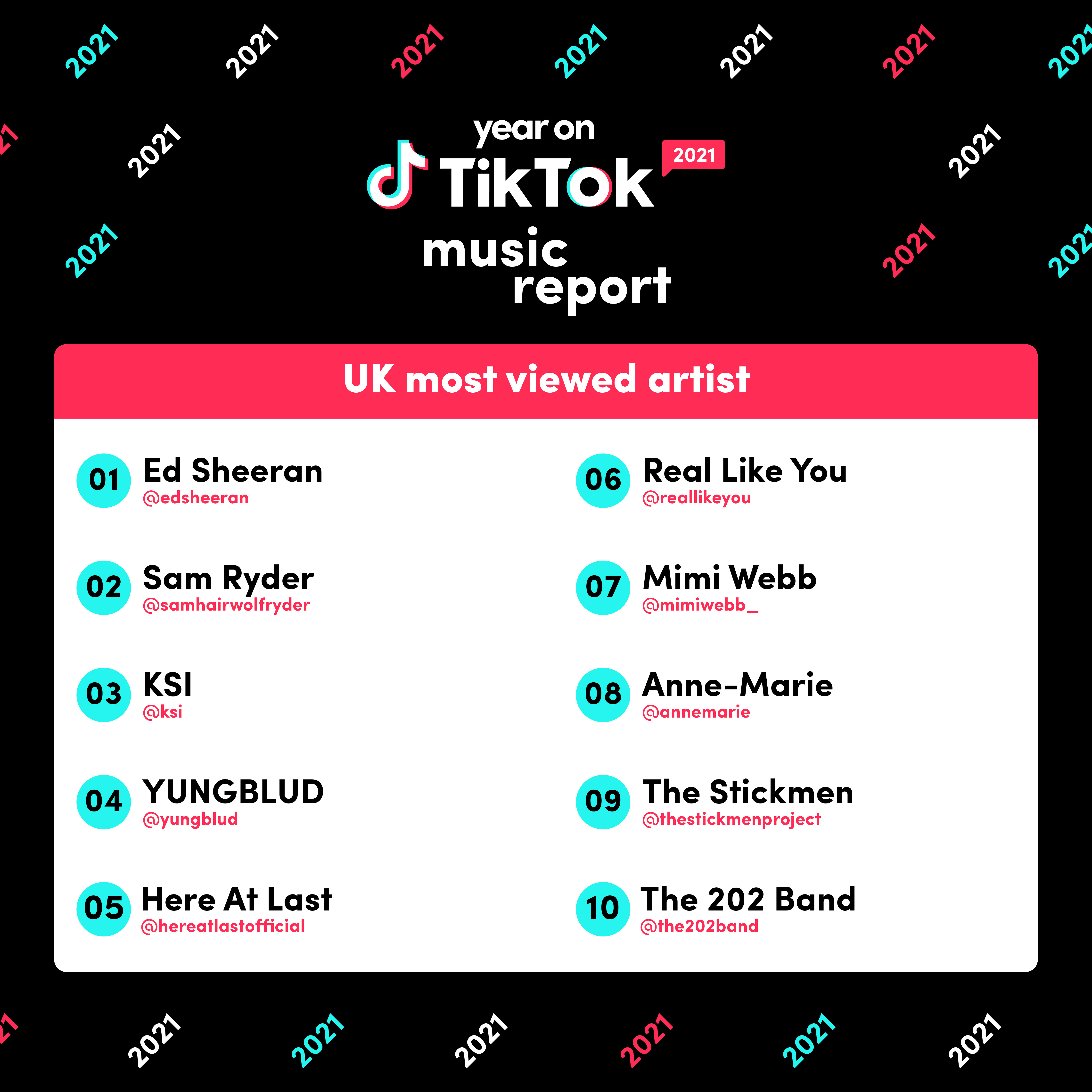 Established artists were the big winners in our Most New Followers category, with Ed Sheeran, Dua Lipa, Niall Horan, and Coldplay all making major gains this year. While Ed, KSI and Sam Ryder and jostling in the top three for Most Viewed Artist Account and Most New Followers, Dua Lipa's music is consistently at the centre of TikTok trends. Following our global partnership with Dua Lipa for the release and music video of "Levitating" last year, a new clip pf the song went viral in April again this year with a brand new meme trend. 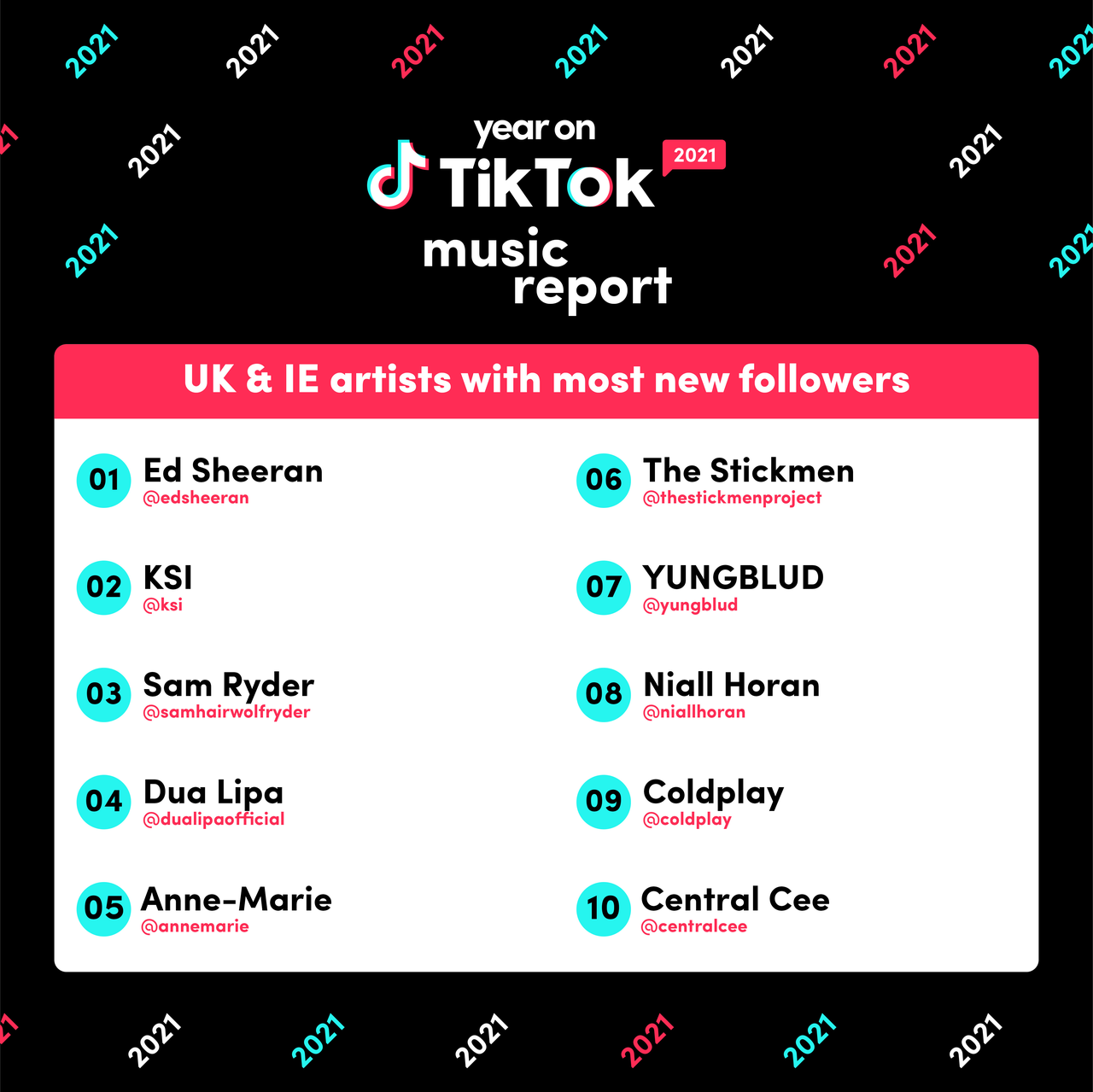 In 2021, Sam Ryder continues to reign supreme as the UK music artist with the most followers in the UK and Ireland, proving that his relatable, contagiously fun style continues to be hugely popular to a legion of 11 million fans. Meanwhile, Ed Sheeran and YUNGBLUD enter the top 10 follower charts for the first time, while KSI, Dua Lipa and Anne-Marie move up this year's list.

Your Sound, Your Life: Top Genres

Hip Hop and Rap have continued to dominate TikTok, retaining the top spot as the most popular genre, followed by Pop and Dance music. This year we've also done a deep dive into the top tracks by genre, based on video creations.

"Body" by Tion Wayne & Russ Millions is naturally number one in UK Rap, while Olivia Rodrigo leads as the Queen of Pop. "Beggin" by Maneskin, also this year's second most popular track globally, takes the #1 spot as top Alternative track in the UK. 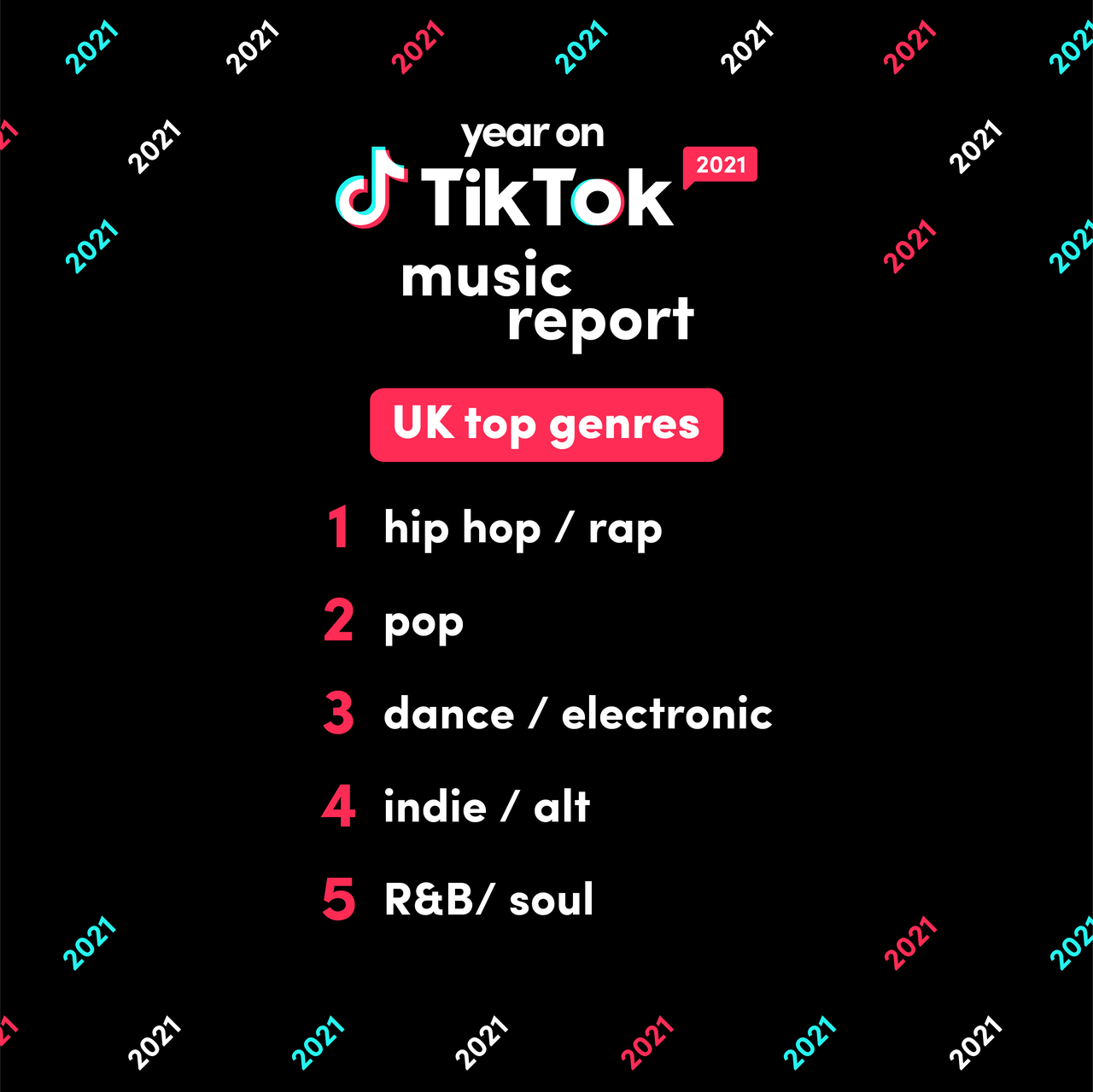 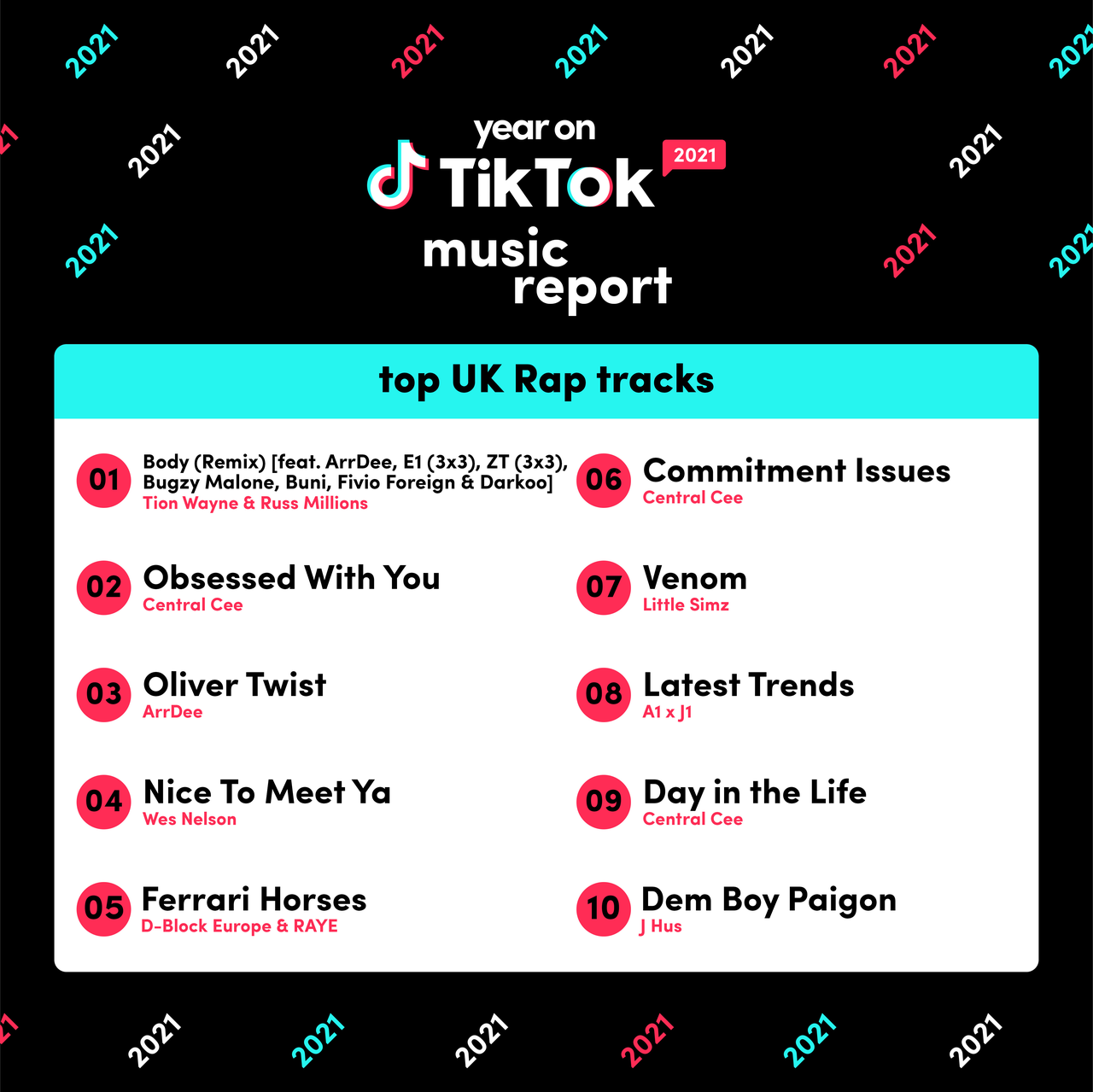 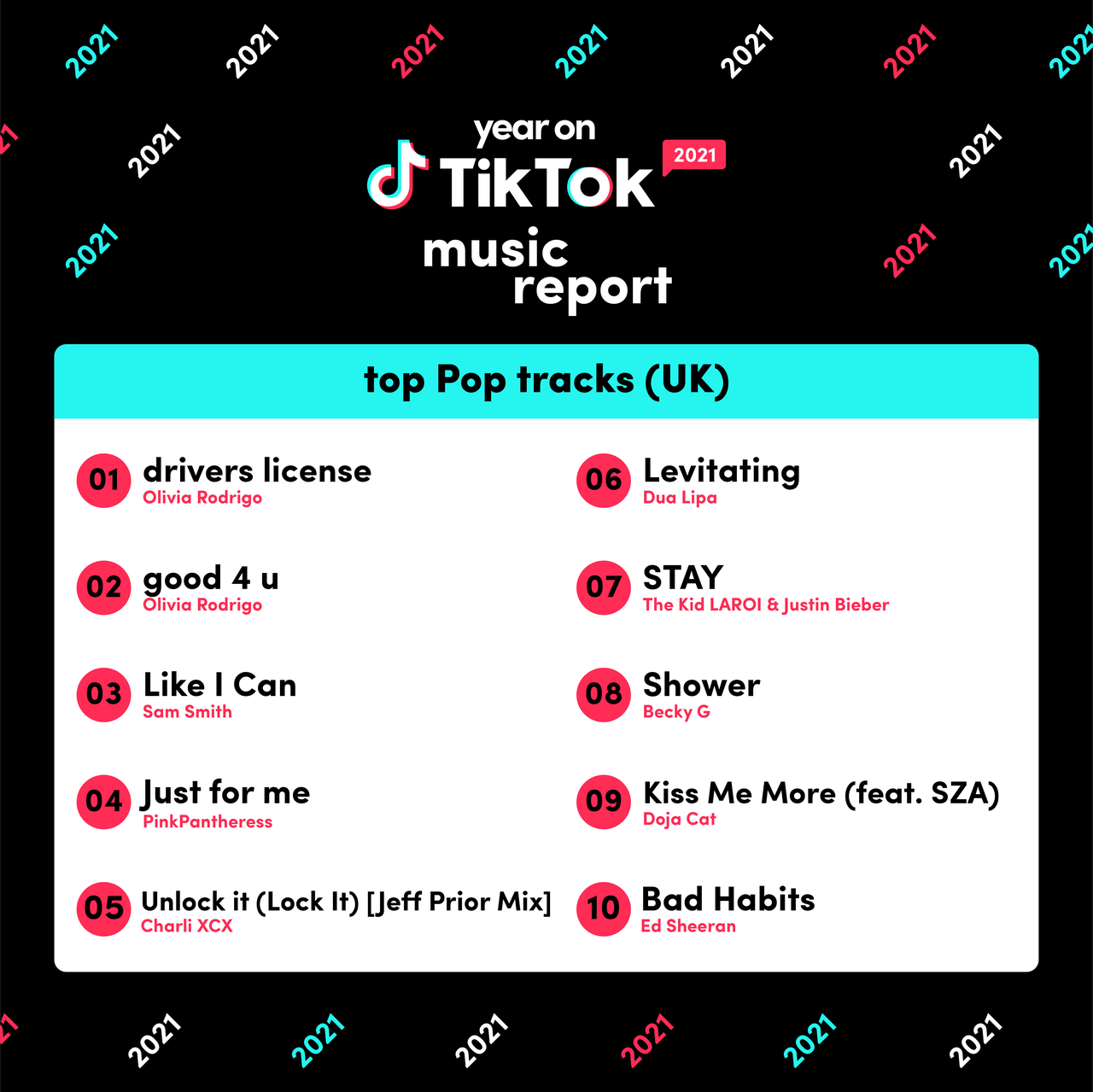 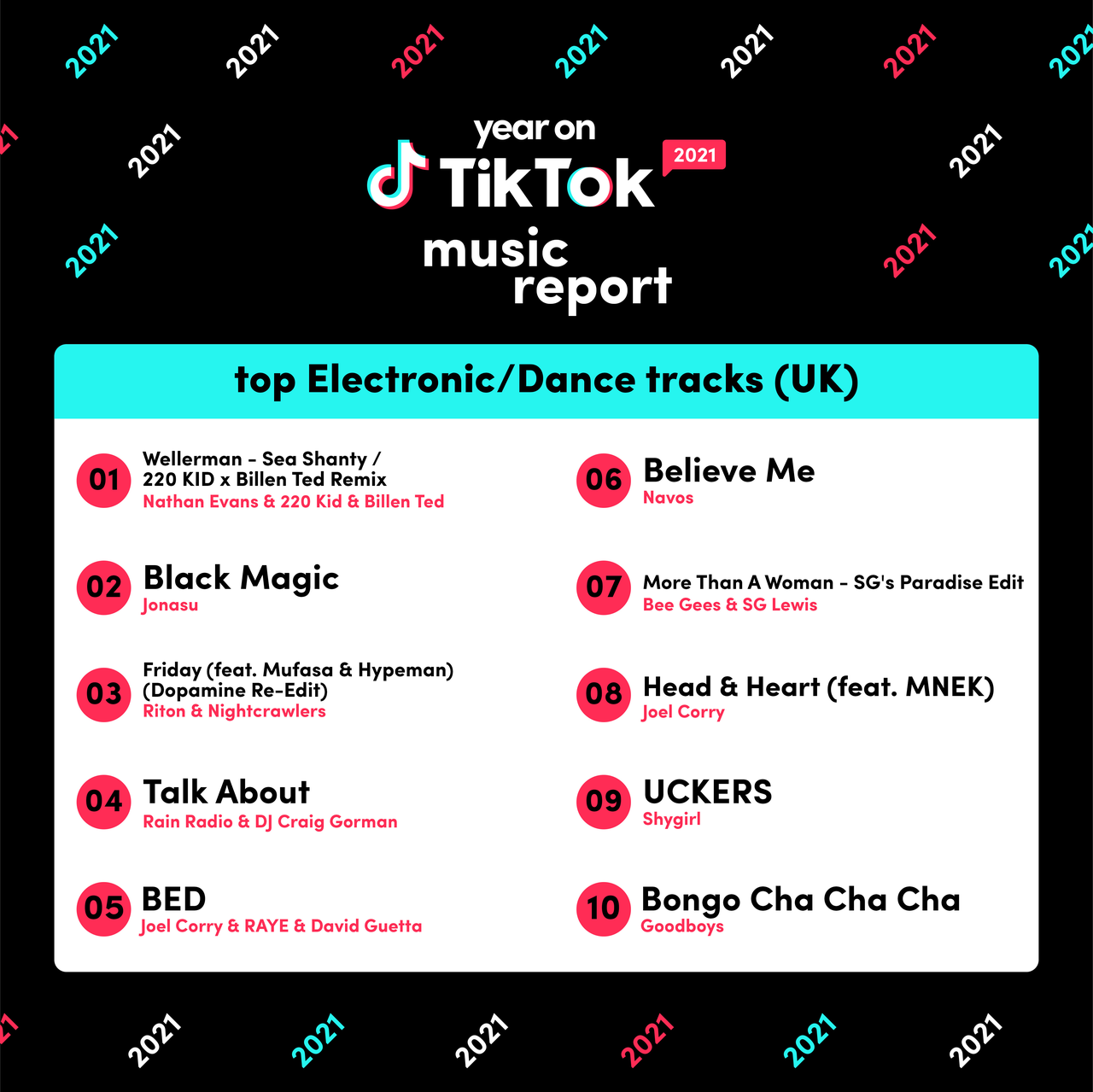 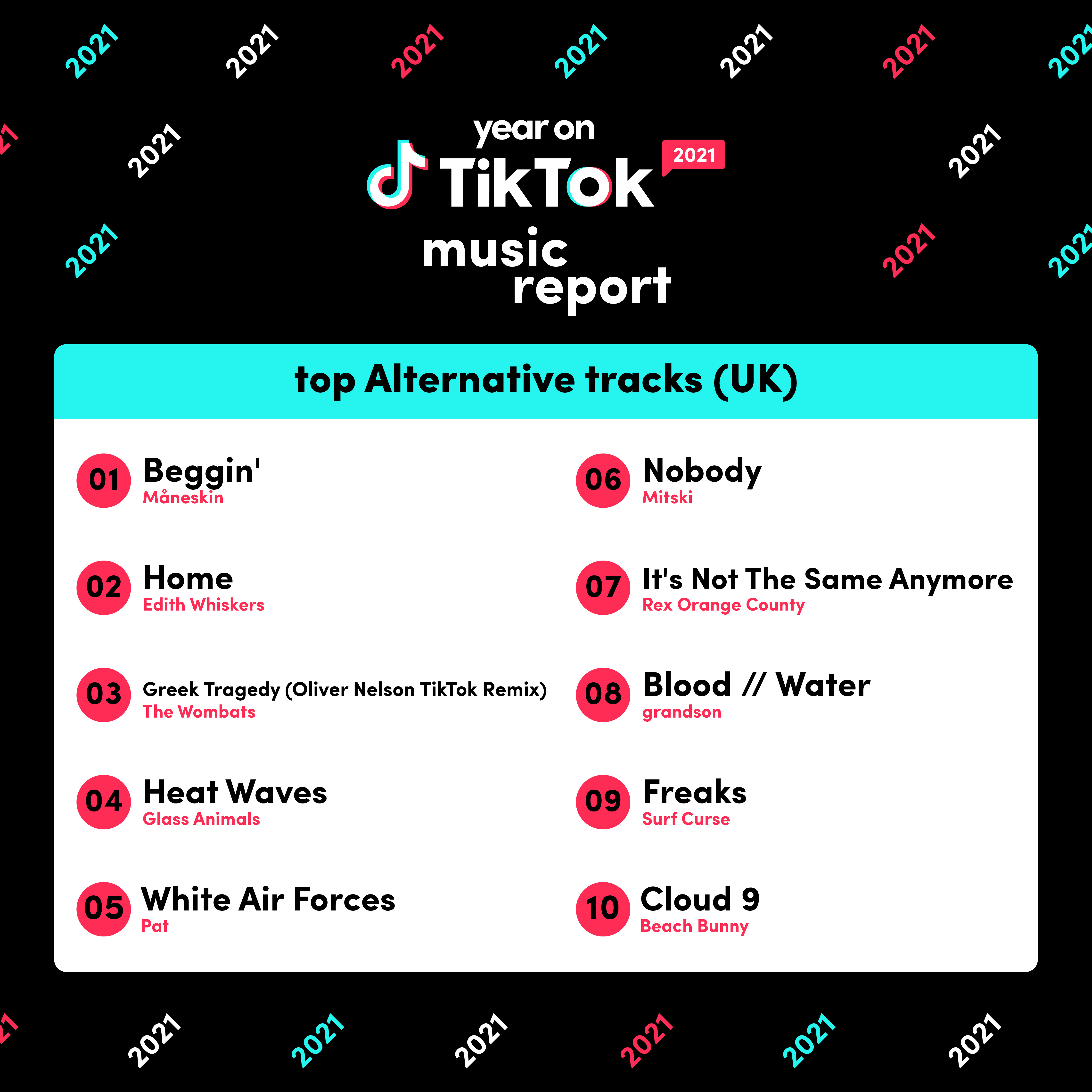 More artists went LIVE on TikTok than ever before, with global superstars like Ed Sheeran and Coldplay using our platform to reach millions of fans around the world. Ed Sheeran's performance at the UEFA EURO 2020 Show broke the record for the biggest ever LIVE music performance on TikTok with over 5.5 million unique vwers, and leads as our most watched LIVE moment in 2021.

Meanwhile, there has been an incredible busking phenomenon happening on TikTok - entirely unique to the UK. Some of our most popular #BuskTok artists, Liv Harland from York and Brad Ryan from Sheffield, have held some of the biggest LIVE moments throughout the year, with people watching on TikTok or travelling from all over the country to see them live on the streets of their home towns. 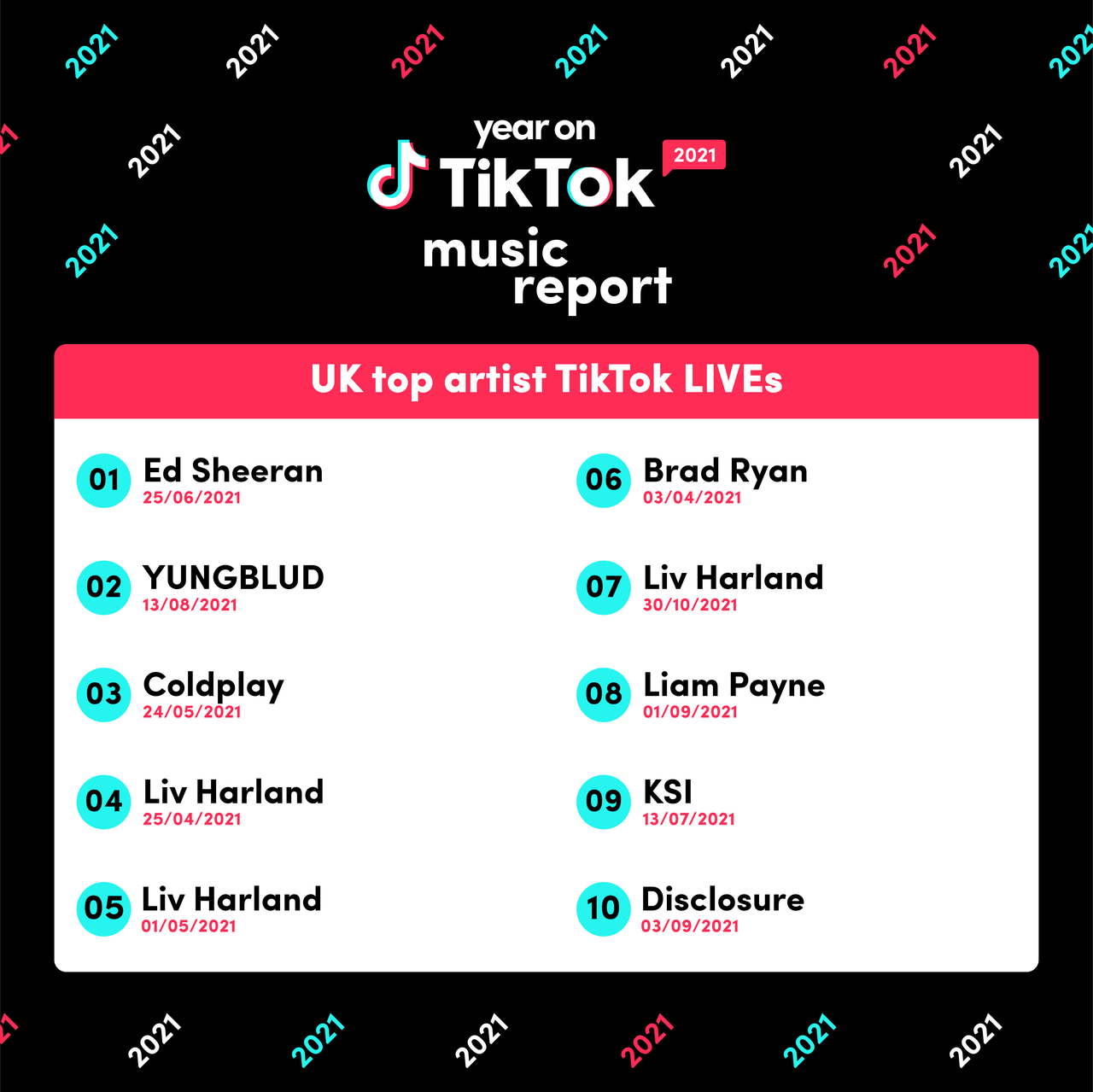 It Takes Two: Most Duetted Artists

The Duet function is an original TikTok feature that's been a community favourite since the start, allowing people to build on another person's videoby recording their own alongside the original. It's a creative format for interacting with others' videos, building on existing stories, and creating new and unique content in collaboration with creators across the platform.

Alto Key is an independent London-based artist who makes indie/alt-pop music. His content on TikTok is surprising, educational and joyous - posting everything from parodies and jingles, to skits and quickfire songs. This year, he tops our list as the most duetted artist, with creators loving his unique style and easy-to-digest music and content. 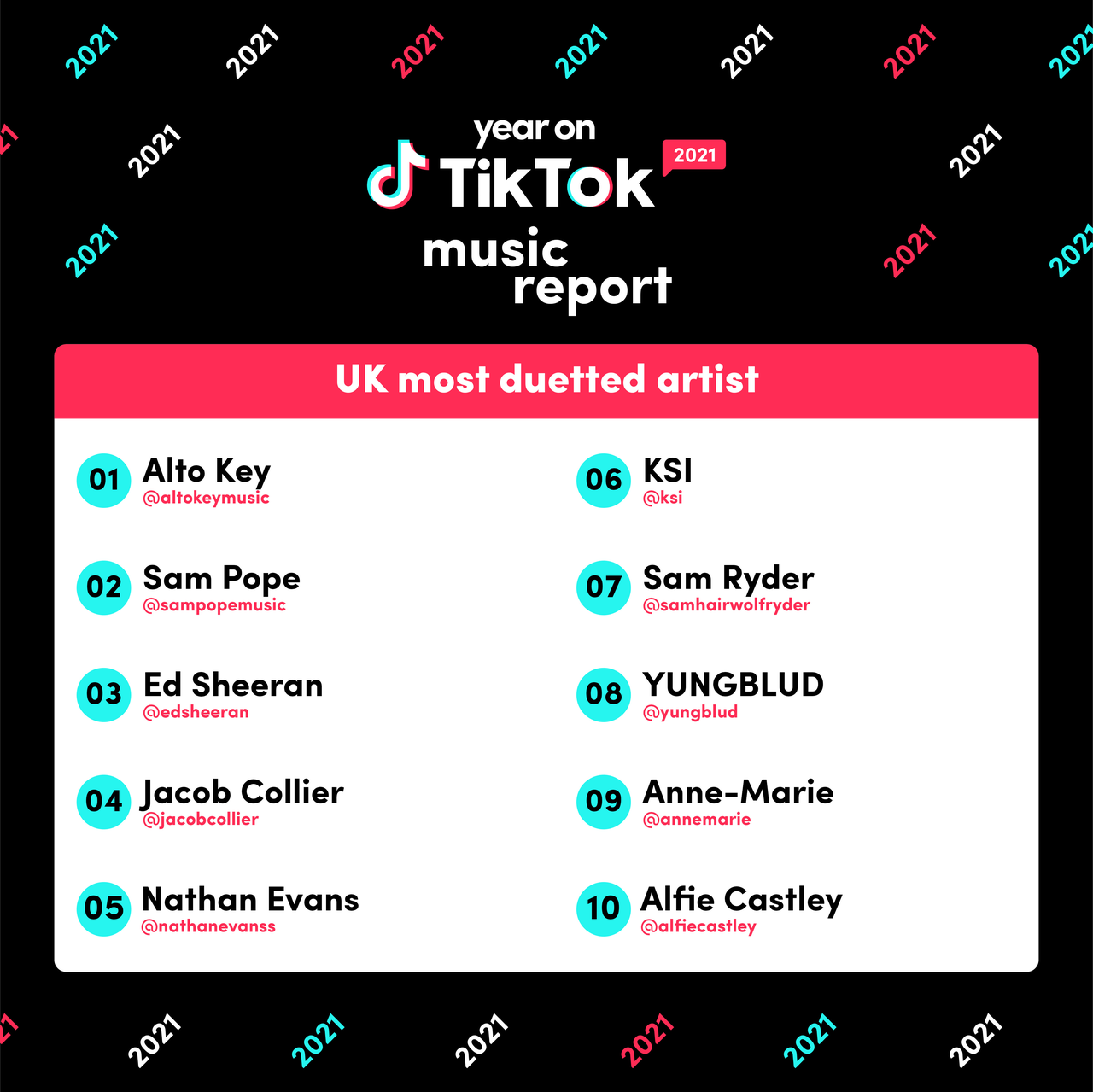 Tom Rosenthal
UK singer-songwriter, Tom Rosenthal has had two viral hits this year - first, as the man behind "Home", and in November, his 2018 track "Lights Are On" got another reboot on TikTok. Creators have been using the song as the soundtrack to an emotional meme trend, sharing moving and personal stories about how they were bullied or made to feel excluded when they were younger. With 1.5m followers, Tom is also one of the UK's most popular artists on TikTok, sharing new music, talking to fans on LIVE Q&As and posting behind the scenes footage of him creating in studio.

Dreya Mac & FelixThe1st
UK rap artists Dreya Mac and FelixThe1st have become some of the most notable breakout TikTok creators in 2021. Their track "Own Brand Freestyle" has taken off both in the UK and around the world, now with over 2.5m video creations. Powered by a fun, easy-going dance challenge, the song has hit #3 on the Global Viral 50 Spotify Chart and #64 in the UK Singles Chart.

Celeste
Soul and jazz singer-songwriter, Celeste, has dropped her new album, "Not Your Muse", this year and also saw her 2019 hit, "Strange", start trending on TikTok after Netflix included it in their show, Outer Banks. Over the summer, creators began using her song as the backing track for meme trends related to the show, as well as light-hearted video content using TikTok's "Faux Freckle" filter. This year, Celeste has been sharing heart-wrenching throwbacks to her live performances, while also thanking her newfound fans on TikTok for sharing their love of "Strange".

Fuse ODG
British-Ghanaian artist, Fuse ODG, joined TikTok earlier this year after his 2014 debut single, Antenna, started trending on the platform with a simple dance challenge. It soon hit #1 in the UK Hot 50, and the afrobeats track has been used by the likes TikTok superstar, Jeremy Lynch and Premier League footballer, Raheem Sterling.

Nimco Happy
Nimco Happy is a Somali artist who has taken the internet by storm after her upbeat, catchy song, "Isii Nafta (Love You More Than My Life)", organically went viral on TikTok at the start of October. With lyrics in Somali, English, Arabic and Swahili, it's a global success story that shows how music can cross boundaries and languages. High profile artists such as Cardi B and Stefflon Don have already jumped on TikTok to show their appreciation for the track, along with creators like Chunkz and EHIZ. She joined TikTok this year with bang, creating a welcome video duetting with Cardi B.

Elton John
Elton John landed on TikTok in November last year and has never failed to bring his personality and flair to the platform. From his Crocodile Rockin' rendition for Halloween, to his educational videos with Olly Alexander, Elton has embraced TikTok and brought his iconic music to a new generation of fans. Now as we look towards the festive season, he's collaborated with Ed Sheeran for a "Merry Christmas" single, which he's launched on TikTok and is a big contender for this year's #1 spot in the Christmas charts.

Tom Odell
Singer-songwriter, Tom Odell, and his 2012 song, "Another Love" has been used as the soundtrack for everything from memes, to football, to emotional declarations of family and love. Meanwhile Tom has been using TikTok to go LIVE and perform songs from his latest album, "Monster". He's also been making the most of the platform's features, duetting with fans as they use his music to express themselves.

Little Mix
Beloved girl band, Little Mix, have been long-time TikTok devotees, and this year, to celebrate their 10-year anniversary, they launched the #LittleMixCovers challenge on TikTok. The challenge encouraged fans to sing their own renditions of Little Mix classics, reaching more than 18m views as creators and artists shared their love for the girl group.

Aitch
Manchester rapper and songwriter, Aitch, has become known for his cheeky videos showing his life as an artist, friend and football fan. He became the first artist to host the #DuetRoulette challenge, giving creators an opportunity to duet his single, "Learning Curve", and inviting them to record their own verse. As a big football fan, he's promoted worthwhile initiatives like Soccer Aid on TikTok, and has even taken fans out shopping with him.

A huge thanks to our artists, their teams, all our partners. the music teams here at TikTok and of course the global TikTok community for making 2021-of-a-kind.  We'll see you in 2022!